Let’s state out the outset that this is a challenging one, because the terms addiction and dependence have no objectively agreed-upon definitions.

What we do know is that marijuana is not addictive in the normal sense of the word. People can become habituated to using marijuana, just as they can any other substance that alters one’s mood and brings pleasure (coffee, anyone?)

At certain times, everyone turns to some kind of substance to alter his or her mood. We do it with food, with drink, with exercise and sometimes, with chemicals. America’s first drug of choice is alcohol, followed by prescription drugs like Vicodin or Oxycodone. While some Christians consider alcohol strictly forbidden, many others see no problem with drinking alcohol responsibly and in moderation. For most people, drinking in moderation does not lead them into alcohol addiction. Likewise, with most marijuana users – addiction does not follow use.

I’d like to point out some serious hypocrisy with the law. To label marijuana as being dangerously addictive without holding an even stronger conviction about alcohol is dishonest, given that alcohol addiction is demonstrably worse in every way. Recovering from alcohol addiction is a terrible ordeal. Recovering from a “marijuana addiction” can be uncomfortable, but it is much less traumatic.

Unfortunately, there are cases where teenagers have decided to become habitual marijuana users, and this is an unhealthy situation (just as it would be if they developed a drinking habit), and intervention becomes necessary. However, an “addiction” to marijuana is primarily behavioral and patients usually suffer only minor discomforts when quitting. Normally, they simply must learn new behaviors and avoid using marijuana, and normal function returns quickly.

There is some genuine concern that no one under the age of 23 should habitually use marijuana, as the prefrontal cortex of the brain is still developing and there are some studies to suggest that development may be adversely affected by heavy use in a still-developing brain. However, after the brain is fully developed, there is no evidence to prove any long-term negative effects on the brain. In fact studies are showing that the opposite may be true. 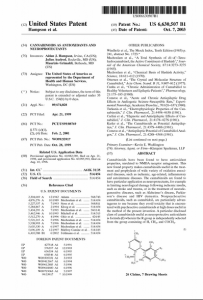 Many people are unaware that the U.S. government holds a patent on cannabinoids (cannabis compounds) as antioxidants and neuroprotectants as medical treatment of neurodegenerative diseases, such as Alzheimer’s disease, Parkinson’s disease and HIV dementia. Cannabis has been used for centuries as a treatment for migraine headaches. There are some doctors and researchers who now believe older brains can actually benefit from regular cannabis use as a prophylactic against Alzheimer’s.

Another area of treatment for which cannabis holds great promise is the treatment of PTSD. There are studies that suggest that cannabis can help the brain “forget” and heal from trauma.

“The findings of our study suggest that the connectivity within the brain’s fear circuit changes following trauma, and the administration of cannabinoids prevents this change from happening,” the researchers concluded. “This study can lead to future trials in humans regarding possible ways to prevent the development of PTSD and anxiety disorders in response to a traumatic event.”

Nearly 30 percent of veterans who served in the Iraq and Afghanistan wars suffer from PTSD, according to a 2012 VA report. Some scientists have suggested that marijuana may help PTSD symptoms, which can include anxiety, flashbacks and depression. In a recent study, patients who smoked cannabis saw an average 75 percent reduction in PTSD symptoms.

Despite the fact that medical marijuana is legal in more than 30 states and the District of Columbia, VA doctors are prohibited from completing patient forms seeking recommendations or opinions regarding medical marijuana to treat conditions like post-traumatic stress disorder (PTSD).

Tragically, a few weeks ago the US House of Representatives rejected a proposal that would have allowed doctors at Department of Veterans Affairs hospitals to discuss the use of medical marijuana with patients, and would have blocked the VHA from punishing doctors who participate in state programs. The amendment failed narrowly by a vote of 210-213 with 35 Republicans voting in favor of it. This razor-thin margin narrowed from last year when a similar measure failed by 26 votes.

Truth: Studies have not discovered anything in marijuana that makes it physically addictive. It may be psychologically addictive, but so is chocolate. Addictive personalities tend to abuse substances of various kinds, but the vast majority of cannabis users are not addicted to it, and could quit any time they choose, and many do. Truly addictive opiates like Codeine, Vicodin and OxyContin are legally prescribed every day, despite their dangers and high potential for abuse, yet we still arrest people for using cannabis, a non-addictive and safe medicine. This is an immoral and cruel abuse of the force of law.