About a year ago I could barely move. Doing everyday activities such as walking, dressing myself, and even using a toilet was extremely difficult and painful. I was suffering from a severe autoimmune disease known as rheumatoid arthritis. Like most diseases, it was progressively getting worse. I kept seeking a natural solution while simultaneously taking prescription drugs just to survive.

After a while, I considered getting a medical marijuana card so that I could smoke cannabis in hopes of alleviating some of my pain and, in turn, cut down on the number of pharmaceuticals I was taking. That’s when a friend told me about juicing cannabis. She told me that if you juice the leaf and/or bud of the raw, unheated plant, it can eliminate chronic pain and even put many diseases into long-term remission.

I did some research and learned that there is a doctor in Northern California who started the burgeoning juicing movement in 2007. Dr. William Courtney, M.D., and his wife Kristen Courtney have founded Cannabis International (see the video at the bottom of the home page of www.cannabisinternational.org). After seeing Dr. Courtney myself, it took a while for me to actually obtain a large enough bag of leaf to give the juicing experiment a try. Once I finally did, I had enough to juice for about a month.

After just a few days of drinking the juice mixed in a smoothie, I was able to eliminate all of my pharmaceuticals. Today, ten months later, I’m still pharmaceutical-free and almost in complete remission from RA. I drink cannabis juice smoothies daily and because the plant hasn’t been heated up or dried out, it does not get me high. I have written a book called Juicing Cannabis for Healing: How I Achieved Almost Complete Remission of Chronic Pain by Juicing Fresh, Raw Marijuana Leaf (www.juicingpot.com).

The biggest obstacles to patients who wish to try juicing are:

1) where to obtain the leaf to juice and

2) how to do it without getting into legal trouble.

In my book, I talk about how to obtain the leaf, which is not very easy to do at the moment. But ultimately I encourage patients to learn how to grow their own medicine. And the reason for this is that is it best to juice high CBD strains and also you need to know if your leaf has touched a grow light or if it has been sprayed with pesticides. People with compromised immune systems do not need to be ingesting carcinogenic chemicals with their medicine. When you grow it yourself, you control these factors. Plus, other people, as well meaning as they may be, can let you down. Maybe they will give or sell their leaf to someone else when you are counting on it. Or maybe their crop will get spider mites. If you learn how to become a master grower, you’ll have a much better chance of always having the medicine when you need it.

In my opinion, there is not a more medicinally healing plant on our earth. Marijuana is being called a panacea by some top people in the industry. It has evolved with us for about 34 million years. Before the prohibition, cannabis was prescribed regularly by doctors. Terpenes and cannabinoids are the main constituents of cannabis which are responsible for its unparalleled healing abilities. Cannabinoids are also found in breast milk but other than cannabis they are only found in limited quantities in a few places in the plant kingdom such as in Echinacea and flax.

As the revolution towards full legalization continues, my hope is that policymakers:

1) allow citizens to grow their own medicine and

2) allow for a generous number of plants per patient in order to make juicing possible.

If our voices and votes count, the power is in our hands. Spread the word and educate your friends and politicians. One day there will be no need to fear disease because there is a plant that has been put here on this earth for our healing, our enlightenment, and our pleasure.

Katie Marsh is an indie author, medical marijuana activist, wife, and mother of two. After a five-year bout with severe rheumatoid arthritis, she discovered that cannabis juice smoothies are the only medicine she needs.

She penned the book Juicing Cannabis for Healing: How I Achieved Almost Complete Remission of Chronic Pain by Juicing Fresh, Raw Marijuana Leaf (http://www.juicingpot.com) in order to share what she’s learned through research and experimentation with others. In 2015 she and her husband started an MMJ care giving business, offering high CBD cannabis juice and concentrates to patients.

Today, she lives with her family on a 25-acre burgeoning sustainable farm in Northern Maine. 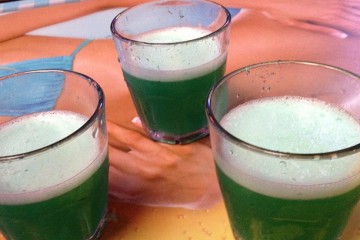