Maybe you’ve heard that cannabis and bone health go hand-in-hand, especially when healing fractured or broken bones. But did you know that it can also help treat osteoporosis and other related bone diseases?

Or how about that cannabinoid receptors are present throughout your bones, and are actually in control of making new bone tissue and breaking down old tissue?

Cannabinoids are deep inside your bones…

It’s true – the natural cannabis-like compounds produced by the body, which are known as endocannabinoids, are fundamentally involved with maintaining the health of the skeleton. So if something goes wrong with your naturally-produced cannabinoids, using cannabis-based medicine could actually help a great deal.

The current understanding is that, basically, cannabinoids and cannabinoid receptors are produced by certain key types of bone cells – cells known as osteoclasts and osteoblasts.

The osteoblasts produce new bone, while the osteoclasts break down and absorb old bone. (An easy way to remember the difference is to think of osteoblasts as blasting out new bone material.)

Research has shown that altering the levels of cannabinoids present in the bone cells causes changes to the production rate of new bone and the absorption rate of old bone.

This shows that cannabinoids and the cannabinoid receptors are crucial to these processes!

So how can this help a broken bone?

When a bone is broken the osteoclasts and osteoblasts need to work quickly. They work in tandem to absorb the old and damaged bone and produce new bone to knit together the break.

So, given that altering cannabinoid levels can change the rate of absorption and regrowth, some enterprising scientists decided they’d further investigate bone healing in rats.

The researchers were able to demonstrate exactly how effective the cannabinoid CBD is in healing fractures – in particular, fractures of the femur (the thigh bone, usually the biggest/strongest bone in a mammal’s body), which are notoriously difficult to heal.

Furthermore, the study showed that CBD also caused the healed bones to be stronger than they were before the break!

This effect was not shared by THC, and in fact, when THC and CBD were given together in an equal ratio, the THC cancelled out the effect of the CBD. However, THC was shown to reduce stiffness in the muscle around the break.

In other words, cannabis preparations that include a greater ratio of CBD to THC may be useful, but further research is required to establish the ideal ratio, and clinical trials would be needed to find out the correct ratio for humans specifically.

So what do we know about cannabis for bone conditions in humans?

In addition to cannabis mending broken bones, we have a number of studies providing further evidence of the fundamental role of the endocannabinoid system in skeletal health. We also have abundant anecdotal reports of patients experiencing relief from various bone diseases and disorders through the use of cannabis.

What other bone conditions could cannabis help to treat?

Osteoporosis is symptomless, but causes bones to become so thin and weak that they are far more likely to break – in some cases spontaneously!

Osteoporosis is associated with overactive osteoclasts resorbing bone too quickly, so naturally we want compounds that reduce this activity to a healthy level. There have been several studies into cannabinoids that could fulfill this task.

The current theory is that an overactive endocannabinoid system causes overactive osteoclasts, which is why cannabinoids that block (inactivate) the cannabinoid receptors appear to work best.

How to block these receptors in the first place? In this study, the synthetic cannabinoids AM251 and AM630 were investigated, but CBD is also a blocker of the CB1-receptors, so is likely to have the same effect.

With OA, it seems that CB₁-receptor blockers reduce excessive bone resorption by the osteoclasts, just as with osteoporosis.

But CB₂-receptors are also important, as they appear to be primarily in charge of regulating the pain and inflammation side of the disease. Therefore, treatments that combine a CB₁ blocker with a CB₂ activator may be most effective here, but again, a lot more research is required to determine ratios, dosage, etc.

Also known as brittle bone disease, this is a rare congenital disorder that affects just one in every 20,000 newborns. There are several types of the disease, ranging from mild to profoundly disabling.

Afflicted children are likely to be born already showing signs, including spinal curvature, weak joints, easily-fractured bones, and a discoloration to the whites of the eyes that gives them a characteristic blue-ish hue. In severe cases, bones may be broken or extensively deformed even before birth.

Again, it appears that underactive osteoblasts and overactive osteoclasts is the culprit, leading to fragile, easily-broken bones.

While there hasn’t been a great deal of research into the effects of cannabis on OI in children, the similarity between it and other bone diseases caused by osteoclast and osteoblast dysfunction means it is a good candidate for further investigation. Indeed, many adults currently living with OI find that cannabis brings immeasurable subjective relief.

What’s your experience with this ancient medicine?

This is exciting research for sure, but it’s worth pointing out that the ancient Indians and Chinese were using cannabis to ease the pain of breaks and fractures for a thousand years or more, prior to Western medicine making the “discovery”!

Dr. Sue Sisley: Cannabis Medical Research is Being Kept in the Dark as Thousands Die Each Year 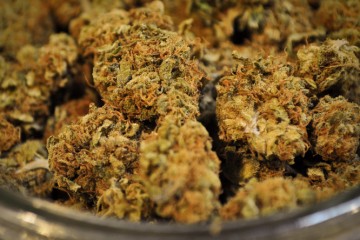