Ever wondered why some cannabis smells more like lemon, and others more like pineapple or grape? Or maybe you’ve just wondered why it’s such a smelly plant in general, so much so that people refer to some strains as ‘skunk’?

The answer lies in cannabis’s production of special aroma compounds known as terpenes, which are found in many other plants as well as cannabis—including… you guessed it… lemon, pineapple and grape!

In fact, pretty much all plant aromas are caused by terpenes, which are volatile compounds that can easily be released from leaf and flower tissues, and serve a variety of functions including repelling pests and attracting pollinators.

Why does cannabis have such a wide range of aromas?

Most plant species are fairly consistent when it comes to their terpene content. While various strains of oranges may taste and smell slightly different, they generally all smell like oranges.

But the cannabis plant is different. Its genetic code allows it to express wildly varying characteristics in different populations, and to adapt very quickly to changes in habitat and environment. Assisted by humans, cannabis has now spread to almost every corner of the planet, and has established dozens of regionally-adapted strains.

The result is a huge range of appearances, growing patterns, effects, and aromas that may be expressed by the cannabis plant, according to its genetic background.

On top of that, all these naturally-established varieties are interfertile, meaning they can be bred together to form even more new strains! Hence, we have strains that smell like almost any fruit or flower that can be thought of, and plenty that smell like pretty much nothing else in nature!

These wildly complex aromas are all determined by terpene content and ratio and can have some amazing applications for a handful of industries.

Why are terpenes and terpenoids so important?

Terpenes and terpenoids are far more than just flavor and aroma compounds. Many terps are commercially produced and sold in vast quantities each year for use in the cleaning, hygiene, pest control and healthcare industries—for example, the terpene d-limonene is widely used in cleaning products and as a solvent, due to its ability to dissolve oils, and is also used as an insecticide.

Furthermore, many terps also have proven medicinal properties, and have been intensively researched over decades. In most cases, terpenes and terpenoids are Generally Recognized as Safe by the FDA for use in medicine and dietary supplements, and therefore present excellent potential in the healthcare industry.

Perhaps most importantly of all, scientists studying the cannabis plant are now beginning to find that some of these terpenes actually interact with cannabinoids to produce unique synergistic effects, which can alter the psychoactive and medicinal properties of individual cannabis strains in fundamental ways.

So… what exactly are terpenes?

Terpene molecules are made up of linked, repeating isoprene molecules. Isoprene is a very important hydrocarbon compound that is produced by a great number of plant and tree species, and its molecules are capable of linking together in countless different ways to form new, more complex molecules—the terpenes.

As well as terpenes, there is a whole other set of related aromatic compounds known as terpenoids, which are essentially terpenes with slightly modified molecules. Both terpenes and terpenoids are lipids (fats) and make up a large fraction of the essential oils of many plants.

And finally, the cannabis terpenes themselves!

While there are hundreds (if not thousands) of terpenes and terpenoids that may be present in cannabis, there are just over a dozen that are pretty much always there in sufficient concentrations for them to influence the delicate scent that results. It’s very similar to the perfume industry itself, which uses blends of certain key terps to create commercial fragrances!

A terpene that comes in two forms, alpha-pinene and beta-pinene. Present in almost every tested strain of cannabis in one or both forms; α-pinene is the more common variant and acts as an insect repellant.

Myrcene is also abundant in cannabis’s closest relative, the hop vine (the oil of some hop varieties is comprised of as much as 70% myrcene!).

Limonene is the terpene chiefly responsible for the fragrance of citrus fruits. This insect repellant also kills harmful microorganisms that attack plants. May cause skin irritation.

Other terpenes found in cannabis:

Humulene: Woody, hoppy. Up to 40% of some hop oils. Often found alongside β-caryophyllene.

There are lots and lots of terpenoids, far too many to list. However, here’s some of the most important ones:

Linalool is of huge importance to the perfume and cleaning industry, appearing in as much as 80% of all fragranced products.

Borneol is used as a natural insect repellent, and is present in many plant species that are known for their resistance to pests. May cause skin irritation.

Citral is a very important terpenoid, making up over 80% of the essential oil of several plant species. Also used extensively in perfumery.

This terpenoid is used in perfumery to provide rose-like, floral scents, and in the flavorings industry to create soft-fruit and berry flavors. Also known to attract honey bees. Acts as mosquito repellant but may cause skin irritation.

A terpenoid that has been found in higher levels in indica strains than in sativa. Strong insect repellant.

All of these terpenes and terpenoids are found in varying concentrations in different strains of cannabis. Almost every week, scientists are discovering new interactions between cannabinoids and terps, and finding more and more possible applications for them in medicine. Look out for future articles all about these exciting new developments! 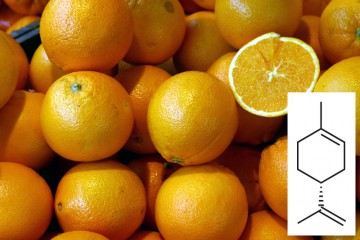 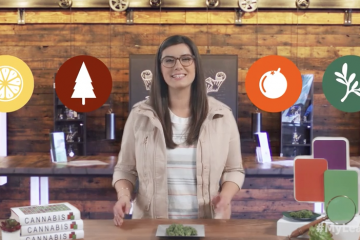