The Social Consequences of Cannabis Legalization

Probably the greatest fear of most conservatives is that legalizing medical cannabis would result in an increase in usage. They fear a world where numbers of people become “stoners”, checked out from life, ultimately becoming a burden on society rather than productive members.

Let’s look at some stats. A recent poll from Pew Research Center revealed that nearly half (49%) of Americans say they have tried marijuana, and 12% in the past year, which the 2012 National Survey on Drug Use and Health says is the most commonly used illicit drug in the U.S. The government survey showed that 18.9 million Americans 12 or older (7.3%) had used marijuana in the prior month.

Consider these numbers for a moment. More than 1 out of every 10 Americans used marijuana in the past year, and 1 out of 14 used it in the past month. And these are only the ones who admit to using it (to the government). You can be assured that many more who would never admit it to the government pollsters.

The fact is, the vast majority of marijuana users are quite private about it because their livelihood is at risk. They are teachers, doctors, government officials, plumbers, computer programmers, athletes and accountants. They are all around you, but you don’t know it because they are not “stoners”. They are normal, hard-working, productive members of society that use marijuana responsibly, either for medical reasons or recreationally.

We don’t call casual drinkers “alcoholics” because they are not. Neither are most cannabis users “stoners”. This stereotype perpetrated by the entertainment industry that has little resemblance to reality in most cases.

Think about that. There are millions of hard-working, intelligent, productive people risking their livelihood to use cannabis on a regular basis. Logically one has to assume this indicates it must bring a significant benefit to their lives, or they simply wouldn’t take this risk.

Clearly, widespread use does not provide justification. However, it does provide evidence that society is not suffering the widespread devastation and breakdown from cannabis that many conservatives fear. And, we now have some hard statistics to look at.

Since Colorado voters legalized recreational cannabis in 2015, the stats from this “social experiment” are coming in. After the vote, Governor John Hickenlooper went on record as being staunchly opposed to legalization, fearing the negative effects it would have on the state. Repeatedly in 2014, he publicly raised concerns.

Yet in a recent interview with Fox Business, Governor Hickenlooper admitted “it wasn’t as vexing as we thought it would be”. In fact, a recent poll by Pew Research shows that even more people support the law now than they did when it was passed.

Governor Hickenlooper said, “The people who used to be smoking it are still smoking it. They’re now just paying taxes. The people who didn’t smoke it still aren’t. We haven’t seen a spike. But I think there is a real expectation from people even that don’t smoke it: You shouldn’t go to jail, and it isn’t that much worse than whiskey or beer.” (Note: Many would argue that marijuana is significantly safer than whiskey and beer.) 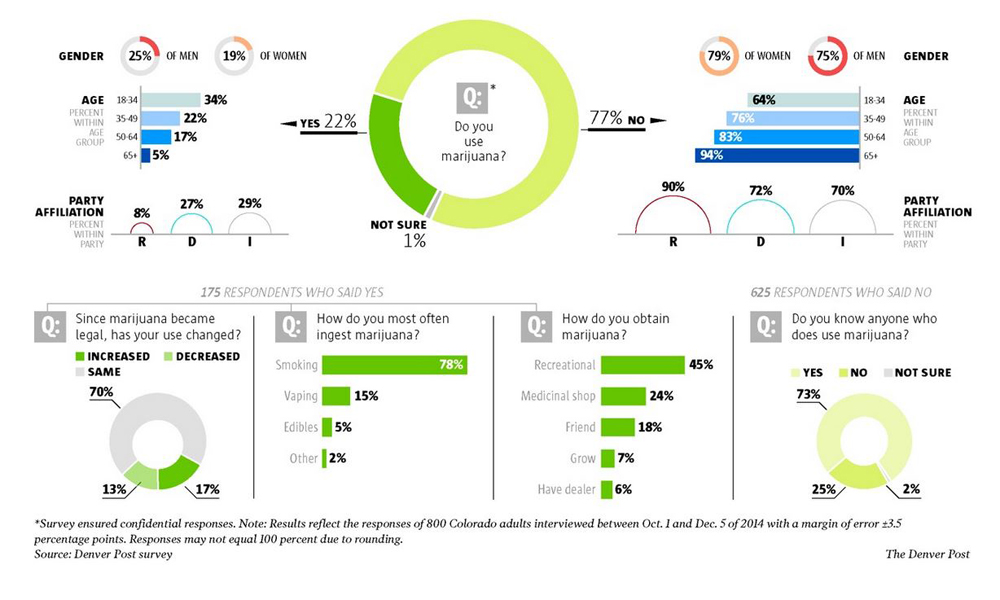 Here are some more statistics from Colorado. Violent crime rates decreased, as did the number of traffic fatalities, which are at the lowest point ever. Millions of tax dollars are flowing into the state for education and other socially beneficial programs. Governor Hickenlooper said he predicts the 2015 Colorado pot industry bringing in $100 million in taxes and a billion dollars in sales — up from $76 million in taxes and nearly $700 million in sales from 2014.

Truth: The harms to society from the legalization of medical marijuana (or even recreational) are simply not materializing as many conservatives fear. It is true that some will abuse cannabis. But this is true of all medicine that has the potential to relieve pain and bring good feelings. At the end of the day, is it really so terrible for someone to get happy, kick back, unwind and eat? Those are the primary side-effects of cannabis.